Are you in your 30s? Here’s why you should look at buying a home in Dubai A few years ago, Jatin and Sherry Gupta, a young millennial couple, he a banker in his early 30s, she a PR consultant (and founder of Excel Comms) in her late 20s, moved to Dubai from Doha. It was a transfer they had actively sought because they both felt Dubai would be a “good place” to be in — not least because it is “a two-and-a-half-hour flight away from home [in north India]”. In a year’s time, both had fallen in love with the city, and decided this was where they want to be in the foreseeable future: at least for the next 5 to 10 years.

That year was also the time when they lived in a rented accommodation in the bustling community of Jumeirah Lakes Towers (JLT), and, over the course of socialising on weekends, discovered that six of Jatin’s classmates from his college in India, all in their early 30s, scattered in various freehold parts of Dubai, had purchased properties of their own in the city.

“It made perfect sense,” says Jatin, sitting next to one of the many green lakes in JLT — on an evening when the weather still permits al fresco seating — and sipping a cup of tea from one of the innumerable eateries dotting the expanse of glass-façaded residential (and a few commercial) towers. “Instead of paying money on rentals, you’re better off owning a place… for sure, property prices will go up and down, but — worst-case scenario — even if you assume that the value of what you bought remains the same at the end of 5 or 10 years, you would still have saved on rent.”

Sometime before Covid gripped the world, Jatin and Sherry bought a 2-bedroom apartment in JLT. One of Jatin’s friends — from his alma mater — who owned a place in the same JLT cluster was instrumental in showing them the ropes.

It needed “courage” to put up a substantial sum of money, the couple points out; the down payment itself almost wiped out their entire savings. “Our parents back in India kept asking us to do — and redo — the math so we didn’t end up cash-crunched and in debt,” Sherry remembers. “But finally, when we sealed the deal, they were very proud of us… It was a big moment, pretty emotional.” Helped greatly by the fact that home was, literally, where their heart was. In Dubai.

It’s important to note the bedrock of this trend. Earlier, it used to be said the Dubai dream lasts only as long as you have a job — or a profit-making business. The day the rug is pulled from below your feet, you have to wake up and smell the coffee.

With the UAE loosening up visa and residency regulations, you don’t need to pack your bags and get ready to exit the country in case you lose your job — or your business folds up. In fact, you can even enter the country and live here as a digital nomad, while being employed elsewhere.

While Jatin and Sherry fetched up in Dubai as ‘newcomers’, there are catchments of young people who were raised here, and whose families were wary of investing in real estate because of the lack of a sense of brick-and-mortar-like permanence. The new gen-ers are now buying their own homes, instead of living in rented quarters like their parents did, points out Aleli D Alo, a property advisor in Dubai. “If you live in a rented place for, say, 10 years, then it’s basically money lost,” she says, echoing Jatin’s sentiments. “Instead, if you had bought the property, you could have paid it [your mortgage] off in a decade… and even sold your place at a higher price… and then maybe bought some place bigger.”

Overall, there’s been a surge in the number of younger, first-time buyers, who are “motivated to buy because the market is going up”. Many younger folks, she adds, “who have earned good money on, say, [investing in] cryptocurrency often want to diversify their funds to a more tangible/stable asset — a first home”.

Aleli also avers “many millennials are becoming digital nomads and moving here because they believe Dubai is very stable… a very safe market.”

Anis Sahyoun, a Lebanese entrepreneur, born and raised in Dubai (and partly in Saudi Arabia), is a firm believer in immovable assets. “No stocks and bonds for me, give me real estate,” he says. And as someone who’s been in the entrepreneurial/startup ecosystem and who’s observed it closely, Anis feels there’s no turning back the “huge influx of businesses here” which is leading to a further spike in the number of home purchases. “There are conflicts and uncertainties around the world [including his home country, Lebanon], but the UAE is a safe, tax-free haven.” People, especially younger people, will continue to pour in. And invest in properties here rather than in their home countries.

Having said that, his reasons for buying property here is also emotional. “This is home, this is a city with a vision, my family and I are here to stay… at least for the foreseeable future.” He’s comfortable in the security the outlook offers.

When Anis’s brother-in-law (who’s French) and his family wanted to move out of France, they zeroed in on Dubai, and have now picked up properties here. “My brother-in-law saw exactly what I did.” Maximum city. Not just architecturally.

Why it is easy to be house-proud

In March 2020, the Central Bank of the UAE issued a decree enabling banks to increase the loan-to-value (LTV) for first-time buyers by 5 per cent — for both expats and UAE nationals. Which means, expats can now borrow up to 80 per cent of purchase prices from banks here.

According to CEO of  Azco Real Estate, one of Dubai’s most premier property services agencies, this increase in LTV encouraged many first-time buyers “to take the plunge”. “From then on, the legislations and visas that have been introduced by the UAE government have been extremely helpful for expats looking to set up a life in the city and have definitely made an impact on the property market.”

In his interactions and his company’s dealings with first-time buyers, he notices something: they are confident about their intent to buy. “A lot of them have done their due diligence and have been living in Dubai for some time before making the decision to buy… once they are at the stage of viewing properties, their mind has been made about buying their first property here.”

It’s a confidence bolstered by a careful curation of policies and mandates that have made home-buying a compelling option. Other than banks offering competitive rates to prospective buyers, in cases where one buys a place and then suddenly decides to leave, “they can always rent out the place very easily — or convert your place into a holiday home — and earn money from it”.

There’s another magic ingredient thrown into the mix: how almost everything can be done online, intuitively. “You don’t even have to be present in person in order to purchase.”

The kind of property management you get here, “is something you will not find anywhere else in the world… everything can be managed on your smartphone. There’s an excess of service providers here in Dubai, who can be accessed even if you are not around in person.”

These are all concerns that have been laid to rest for younger buyers who are looking for a hassle-free experience, with technology being used as a great enabler. Anis seconds the observation: “They’ve just made it so easy.”

Rizwan Sajan, founder and chairman of the Danube Group, may not be a millennial, but the building blocks of Danube Properties have been put in place riding on a strategy to tap into the young, first-time buyer segment.

“Our propositions were formulated keeping in mind the younger target group — those in their early- to mid-30s, buying their first home, who wouldn’t need to be intimidated by the prospect of very expensive properties — for which you need to have wealth passed on to you by your family — and yet would not need to compromise on aspirations like a ‘luxurious’ lifestyle,” says Rizwan. The Danube residences, for instance, are usually furnished, and they are furnished keeping in mind younger, millennial sensibilities.

He adds that at the Danube offices, on any given day, there’s a steady stream of first-time buyers — who usually step out

after signing on the dotted line.

It’s reflective of the same mindset that Lewis Allsopp spoke about: confidence in the market — and an intent to purchase.

Rizwan also tells us how Danube zoomed in on the tagline of ‘stop renting, start owning’ while conceptualising the value propositions of their offerings. There are pure plays such as the 10 per cent down payment scheme and 1 per cent payment per month from thereon among others.

After how the government handled Covid and Dubai Expo, investors are flowing in, market confidence is at an all-time high, and loads of young people — salaried professionals, startup entrepreneurs, digital nomads — from around the world want to move to Dubai. “They will be investing in properties,” Rizwan affirms. “No two ways about it.”

The future, he is super sanguine, “is super bright”.

Home is where the heart is

It all has to come down to the first-time buyer and what they feel will be most beneficial in the coming years,  “If you feel that Dubai is home and moving back to your home country is not on your radar, then it’s time to stop paying rent and subsequently paying someone else’s mortgage — and start paying into your own.” 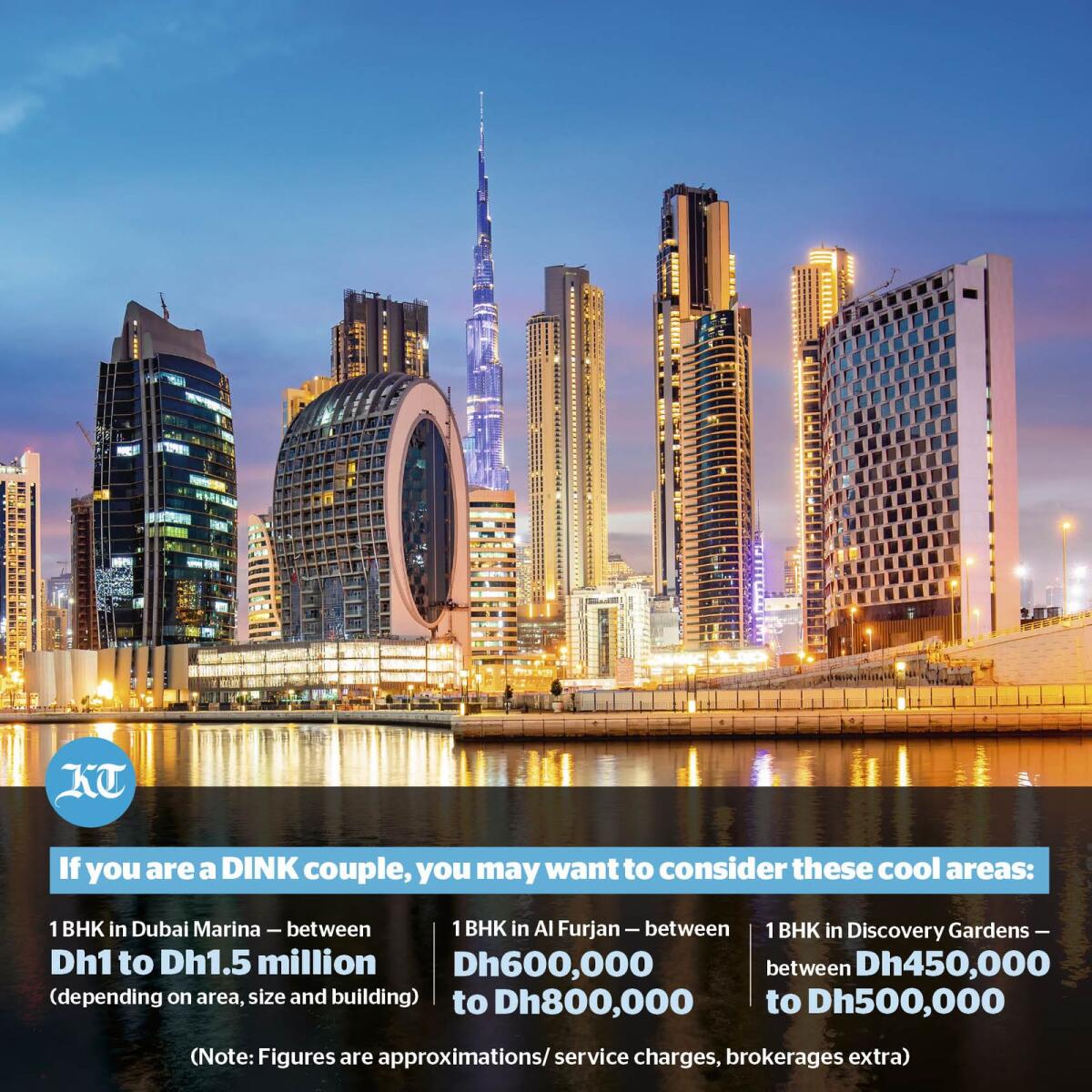 Even if one were to point out that all this sounds notional, the flip side can only be that the market remains volatile. During the pandemic, there was a blip in the property market when prices in Dubai suddenly nosedived. Jatin — he’s the sort who goes to Dubizzle every other day to check on the likely valuation of his property — was most miffed when he saw he could have bought his apartment for an obscene percentage lesser if only he had waited.